The March issue of Esquire magazine presents the main story of the year: editors’ picks of the newest heroes in 12 fields, from film directors, writers, and businesspeople to techies, musicians, and chefs.

The cover features musician Ilya Lagutenko wearing a sweatshirt with the inscription “Mumiy Troll" in honor of the anniversary of the famous group’s debut album. The new heroes featured in this issue range from athlete Alexei Miranchuk to the rising new rock star Grechka. These are “people who live their lives so as to change ours." The magazine published a bio and short a video of each as a sort of calling card.

Esquire in August: Literary Issue
This month’s release inspired by genre of the Soviet workplace novel. 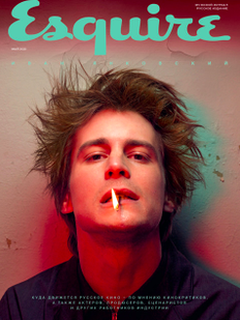 Esquire in May: The Direction of Russian Cinema
Critics and creators of modern cinema discussed the industry’s problems and achievements.
See More